Who is Jesus...looking toward the new year

In Mark chapter 8, Jesus asked His disciples what others said about who they thought He was....John the Baptist, Elijah and one of the prophets were among the answers.  Then Jesus asked them, "But who do you say that I am?"  Peter answered "You are the Christ."

We just celebrated Christmas, the time of year Jesus' birthday is celebrated all around the world.  But who is this Jesus?  Some deny His existence altogether, placing His story in the genre of fairy tale.  Some say He existed but was nobody special, just the son of a carpenter.  Some say He was crazy/out of his mind (like those we read about in Mark 3).  Some say He was a good teacher, or holy man, or a prophet, someone who we would do well to learn from the example of.  Some say He was and is who He claims to be (here is a very partial list):
*  Immanuel (which is translated "God with us"...Matt 1:23)
*  Jesus, the one who saves His people from their sins (Matt 1:21)
*  The only mediator between God and mankind (1 Tim 2:5)
*  King of all kings (there will be no end to the increase of His government and peace...Isa 9:6)
*  Phil 2:9-10 tells us He is the highly exalted One before whom every knee will bow and every tongue confess that He is Lord to the glory of God the Father.

I am like many people who reflect at the end of the year upon life and how I'm living mine, and what changes I'd like to make in the new year.  I unashamedly believe, by God's gift of faith, the claims Jesus makes about Himself.  Honestly though I think that this side of glory, I will always be confessing "Lord, I believe; help my unbelief" (just like the man in Mark chapter 9 who brought his son to Jesus to be healed).  The question I am asking myself right now as I reflect on the past year and look forward to a new one is not so much what my mouth would say if Jesus asked me "Who do YOU say that I am?", but what answer does my life give?
Posted by Connie at 7:03 AM 1 comment:

Blessed by my kiddos

I heard a quote by Cotton Mather last night (Doug Wilson quotes him while debating Hitchens in the movie Collision)...he said "Faithfulness begat prosperity, and the daughter devoured the mother."  It made me pause and ask: "Am I using the prosperity with which I've been blessed to devour or display faith???"

Pastor Tuuri, one of the pastors at our church, taught in a recent sermon about how godly feasting includes remembering those who are less fortunate.  Not just thinking about them, but remembering in a way that alleviates their need.  Yes, enjoy the good gifts God has given, AND share those good gifts with others.  As you have freely received, freely give.

There are all kinds of opportunities to share and give.  We're bombarded regularly.  Here is my question...how do we respond when asked?  Do we see each asking as a bother or an opportunity?  Do we stop and consider if we're in a position to help?

I was so blessed this morning by my own kids.  We were sitting around the breakfast table and we were talking about the Facebook-athon going on TODAY for our friends (the Shubins and Walsers) to raise funds for a mission trip to Ethiopia.  These are folks who love Jesus and want to share Him with people in Ethiopia, giving tangible help and sharing Christ with those He brings them into contact with while there.  I had already sent some funds, but my kids wanted to know if they could pool their money and send more.  Of course!

So off they went to gather their change and when they came back it added up to a little over $8.  These are kiddos who do not get an allowance...this is a chunk of change they wanted to cheerfully give.  Talk about bless my soul!  We talked about how often times we cannot give a lot, but the question is whether or not we're willing to give what we can, trusting God to add it all up as His body works together to make the whole. What a blessing it is to see God at work in their hearts!  What an encouragement to me as a parent to see them bearing this kind of fruit in their lives...as God prospers us, may we use that prosperity to display our faith in Him.

Enjoy His good gifts, and share them with those in need.  If you can help, even just a little, please join the efforts going on today at Reckless Abandon . Thanks.
Posted by Connie at 10:32 AM 1 comment:

This year we made our first attempt at creating a gingerbread house from scratch. 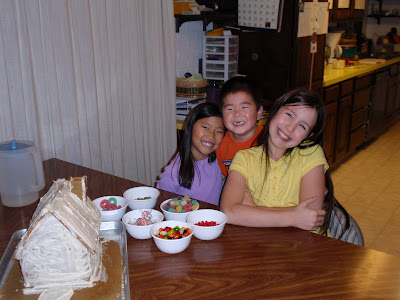 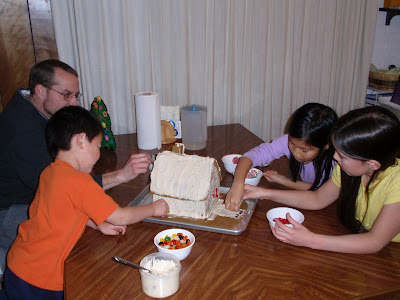 We had a good ole time, but found our particular dough (which we like very much for cookies) was a bit wimpy for roof tops after candy is applied...at least big roof tops.  Okay, so it was way wimpy! They were good sports about letting me take a quick picture before it collapsed. 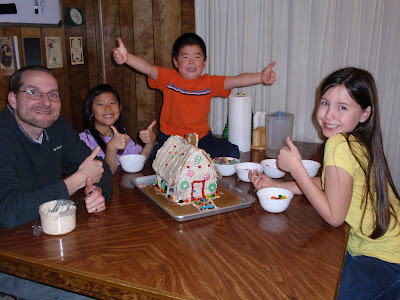 We had the supplies to make it much more candy coated, but due to the structure being somewhat condemnable, we opted to just jump right into eating it.  Next year, Lord willing, we will attempt to make a little village with individual sized houses (we're thinking the roofs just may hold better if they're smaller).  All in all, a fun family night activity even with the learning curve.

The next night my dear hubby brought us home a Christmas tree and the delightful squeals that are associated with decorating sprung into high gear.  On went the Christmas music while lights were strung and ornaments hung. 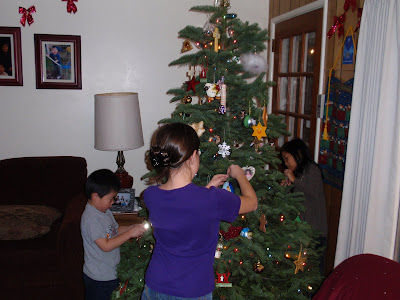 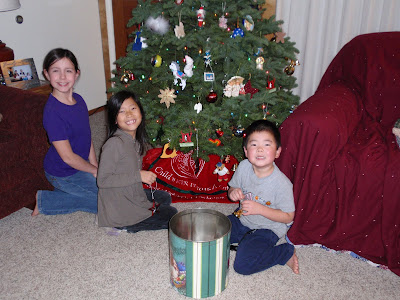 And the next morning, while most of us lounged around enjoying the sparkly lights flashing in the still semi-dark living room, my Bekah cheerfully went to work to make us all French Toast.  God has created us all in Christ Jesus for good works, and I love to see the fruit-bearing children He has given me at work serving our family, and others. 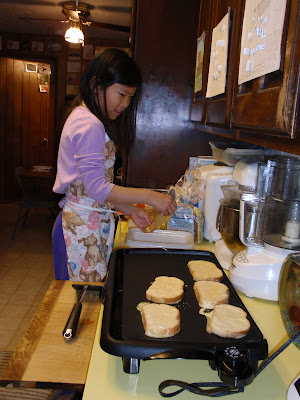 I am listening to an audio book this week titled Just Courage...it starts with a rebuke of sorts to those of us who are all to often guilty of "going on a journey but missing the adventure."  In a recent post, I somewhat disjointedly thought out loud about fighting the good fight and mining for what is valuable, and I am finding this book resonating so far with the same encouragement I've had in my meditations of late to do what God puts into my hand in such a way as to get the value out of it, in contrast to just going through the motions.  How's that for a bona fide run on sentence?

With that said, my girls and I had a deliciously delightful time together yesterday making Gingerbread cookies...laughing, talking, singing, nibbling, creating...so fun!  Here is the recipe we've been using for years for those of you who may want to dig for some golden times with your kids :-).

(One batch makes an average of 2-3 dozen cut-out cookies, depending on factors such as the size of your cutters and how much dough you snitch, etc)

In a large bowl, beat sugar, marg., and molasses until light and fluffy.  Add egg and water, blend well.  Stir in dry ingredients, mixing to form a smooth dough.  Cover with plastic wrap and refrigerate for 1 hour (or more) for easier handling.  Roll out to 1/8 inch thickness, using just enough flour to keep it from sticking to the board and cutters.  Bake at 350 for 9 minutes.  Remove to cooling racks and cool completely. 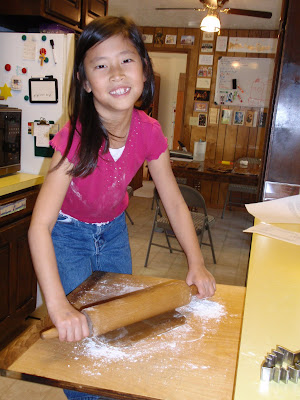 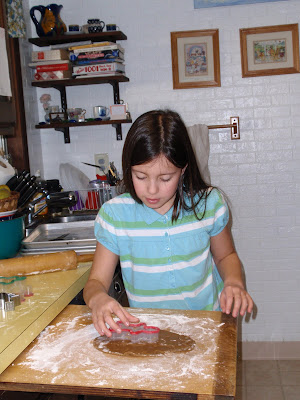 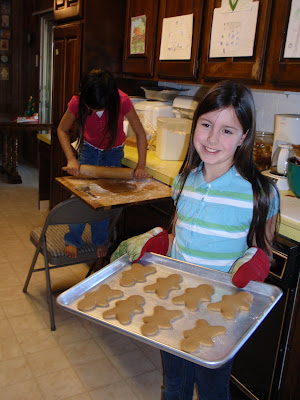 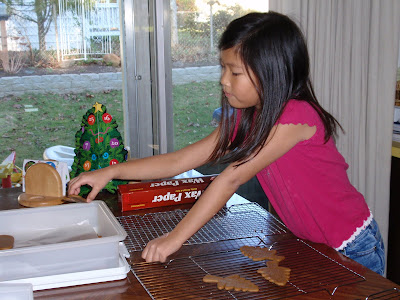 Dig in to these golden pleasures together!