Yesterday, my girls and I were sitting in our Latin class when our teacher introduced us to this week's Latin phrase: "In umbra, igitur, pugnabimus."  When I saw the translation, I laughed out loud.  It means "Then we will fight in the shade."  I think the teacher, who is one of my dearest friends, must have understood the question behind my laughter (the question of "why in the world would we learn THAT phrase?"), because she simply looked at me and assured me there was a great story behind it.

In August of 480 BC, the Spartan king Leonidas was holding the pass of Thermopylae with a Greek force of 7000 against a much larger army led by the invading Persian king, Xerxes I.  Herodotus (a Greek historian) recorded that there was a Spartan soldier who was told that the Persian arrows would blot out the sun, but instead of being fearful at such a thought, he simply responded with courage and optimism, "So much the better, we will fight in the shade."

All of a sudden, the phrase seemed like a good one to learn. The story reminded me of a quote I like by Winston Churchill... 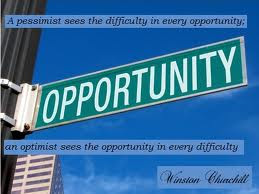 But optimism by itself isn't what I'm after.  I need optimism's foundation.  After we got home, Mike read to us out of 2 Kings about the threat of Assyria's king against Hezekiah...talk about bigger armies!  But Hezekiah rightly went straight to the Lord with the news.  Assyria had overpowered the surrounding nations, but Hezekiah prayed like this:

"O Lord God of Israel, the One who dwells between the cherubim, You are God, You alone, of all the kingdoms of the earth. You have made heaven and earth.  Incline Your ear, O Lord, and hear; open Your eyes, O Lord, and see; and hear the words of Sennacherib, which he has sent to reproach the living God.  Truly, Lord, the kings of Assyria have laid waste the nations and their lands, and have cast their gods into the fire; for they were not gods, but the work of men's hands — wood and stone. Therefore they destroyed them. Now therefore, O Lord our God, I pray, save us from his hand, that all the kingdoms of the earth may know that You are the Lord God, You alone." ~ 2 Kings 19:15-19

God delivered...God did things they would have never imagined.  The only reason I can be an optimist in a world filled with the brokenness brought about by sin is because I serve a God who loves the world He created for His glory...the Living God who redeems, resurrects, and rules...He steps in!  He does unimaginable things for His glory.

Because our God is who He is & He reigns, no matter what circumstance we face we know we are in it by His decree with a good purpose behind it...let us be those who look for the opportunities to trust God and to make much of Him.