A few nights ago, a friend and I were driving home after a birthday party we had gone to together and we were chatting about how there are so many things we have changed our minds on over the years.  Santa fits in that category for me.  I used to be anti-Santa anything and everything.  It's true.  I thought he represented and could only represent materialism and that he was a distraction from any thoughts of Christ a person could have in a season when celebrating Christ's coming was what the season was all about.

The friend Melodie, whose birthday we celebrated, was key in shifting my mind's view on good ole St. Nick.  My children were key also because it became very apparent after my oldest was about 2 years old that we had to do SOMETHING with Santa...what were we going to teach our kids?  They were being bombarded in the public arena with questions like "what do you want Santa to bring you for Christmas?"  We knew we abhorred the practice of telling children Santa lived in the North Pole and drove a sleigh and slid down chimneys to deliver gifts to good little boys and girls only to have them find out years later we'd been lying to them.  I haven't changed my mind on that point.

We stumbled upon a little book titled Santa Are You for Real? by Harold Myra that we've come to really enjoy and it is now tradition to read it together every year, as well as incorporating other resources we've come to find along the way.  About 6 or 7 years ago, Melodie invited us over for a gingerbread cookie decorating party and introduced us to the practice of celebrating St. Nicholas Day (which is Dec. 6th).   After some discussion and further thought, our family began to celebrate in a similar fashion the following year.

Santa doesn't have to represent materialism and be a distraction after all.  Our Father really sent Jesus and He came (amazing!), and through His life and sacrifice we have been brought near, given new life in Christ, and been made true children of God (astounding!).  In heaven, a crowd of witnesses cheers us on in this life, rooting for us to run the race of faith with endurance, assuring us any price we are called to pay is worth seeing Jesus face to face.  And though Saint Nicholas isn't mentioned in the Scriptures like Abraham or Moses or David or the saints of the New Testament, he was still a man whose life was made new by God and as he cheers us on, we can learn from him.  He was orphaned early and instead of being bitter, he rejoiced in his Savior.  Instead of being self-absorbed with the wealth he was left with, he was a cheerful giver.  He lived a faith-filled life of service for the glory of our God. We can look to his life and see how Jesus was made known through the grace given to him...and we can be cheered on to make Him known in our lives through grace-empowered, faith-filled service for His glory.

We have loved the fruit of this practice.  The joy of the season is spread out as we open stalkings on December 6th.  Our children are equipped to be winsome for Christ when asked about Santa in the stores.  We have found that the example of the real jolly ole St. Nicholas has not distracted, but aided our focus upon Christ.  And the contrast between the real man and how he is represented today helps us consider the fallen nature of mankind and our need for our Savior. 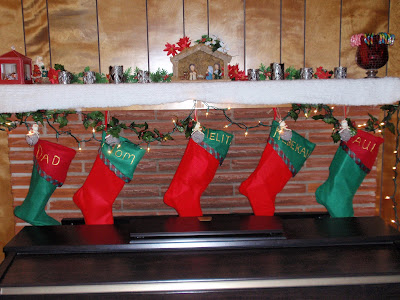 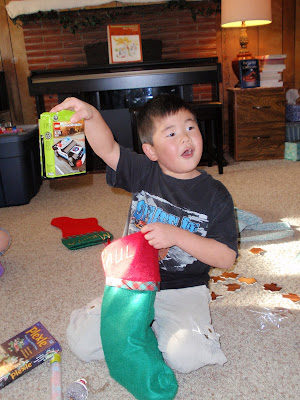 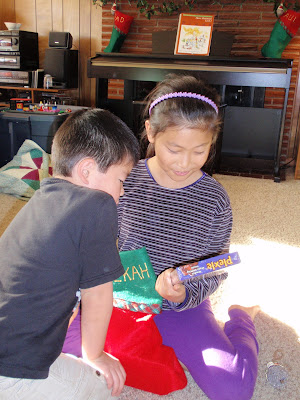 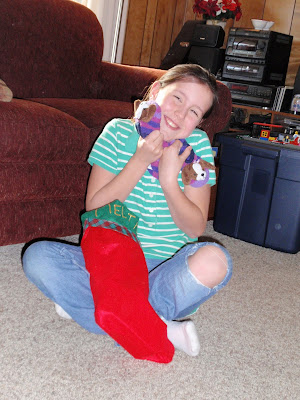 We hope you and yours had a lovely St. Nicholas Day (Dec. 6th).
We did.
Thanks for stopping by.
Posted by Connie at 6:10 AM