I am NOT an engineer

You can add "engineer" to the list of things I am not.  I am not an astronaut, check.  I am not a mechanic, check.  And this year confirmed it by way of double witness, I am not an engineer, check.

Last year we attempted to make a gingerbread house from scratch.  We had a jolly good time and you can read about it here if you like.  The fact is though, our house would have been condemned by an inspector immediately due to a more than saggy roof and other unstable conditions.  Our wee family decided on the spot to try making a village of smaller houses next year, which is now this year, and here is how it went: 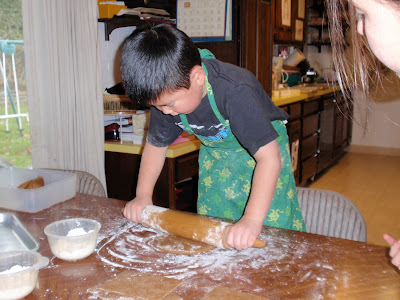 Previous to pictures being taken, we made dough
and designed our houses-to-be by creating cardboard cut-outs.
Then we began the two day adventure of making the pieces.
Here is Paul showing us how to roll out the dough. 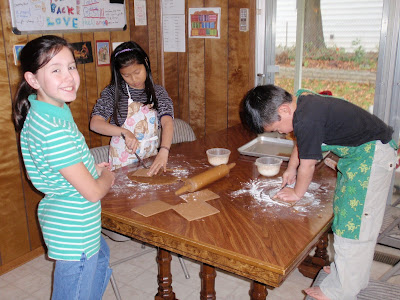 The three kiddos took turns rolling out dough and then cutting the various pieces. 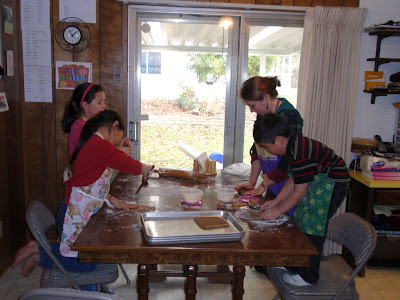 The next day our friend Hannah came to be part of the fun.
More rolling and cutting
candles burning
Christmas music in the background
lots of laughter and visiting 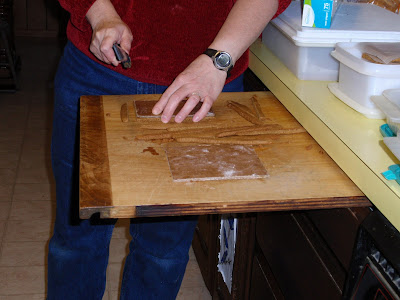 After baking the pieces, they needed to be trimmed.
We called these pieces our "crunchings and munchings."
Anyone who has read the Prydain Chronicles will understand.
If you haven't read them, they are a wonderful read-aloud series. 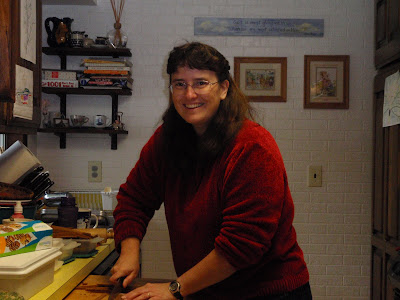 And because it has been brought to my attention recently
that I NEVER
post pictures of just me,
here is one MJ took to remedy that situation.
Yesterday morning we constructed the houses and let them set in our cold garage to stiffen up. And last night, we set them up on the kitchen table... 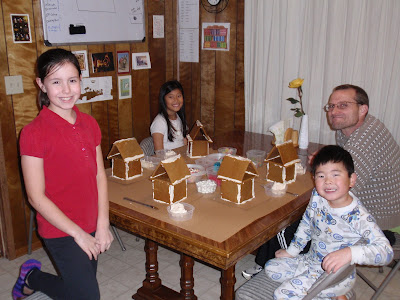 Armed with many different kinds of candy for decorating,
we were ready to begin. 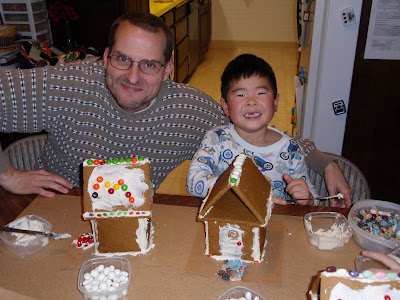 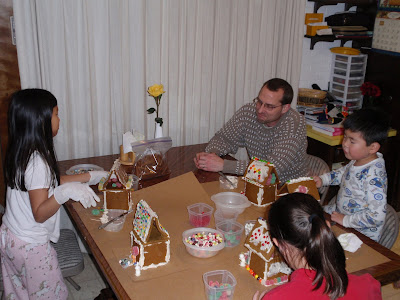 Having a good time together. 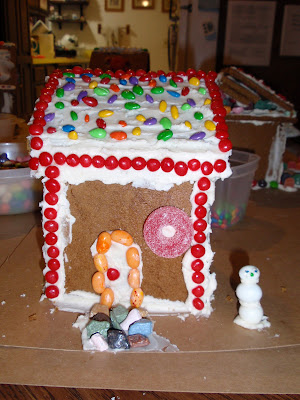 Looking pretty...
we even had little snow men
(made from yogurt covered peanuts and raisins)
The photos may be a little bit misleading.  Truth be known, we had saggy roof problems again this year on three out of five houses.  We rolled with the punches and got creative and just kept going.  The music still played.  The candles still burned. The laughter increased (which is way better than if tears would have started to be shed).  All in all we had a grand time.  But it is plain to us all that I am not an engineer.  At least not yet.  Hmmmm...what should we try differently next year?
Proverbs 24:16 "For a righteous man may fall seven times and rise again, but the wicked shall fall by calamity."
Posted by Connie at 5:18 AM