Forgiveness doesn't come easy, but He gives us what we need...

In Matthew 18:21, Peter asked Jesus how often he should forgive a brother who has sinned against him.  "Up to seven times?", he asks.  And Jesus answered him: "I do not say to you, up to seven times, but up to seventy times seven."

That sounds like a lot of forgiving. Do you have a hard time with that?  It hurts to be sinned against.  Sometimes the way we're sinned against seems to drain our very life out of us.  Though I have a tremendous amount of friendly and loving experiences in my life to be thankful for, I am not a stranger to being sinned against. I have crumpled to the floor under the weight of very harsh words. I have lived with the shame of feeling like damaged goods because of abuse experienced as a child.  I have been bold faced lied to, cheated and betrayed. We live among brokenness and sin...criticism and bitterness and anger and the desire for revenge is what comes easy.  Not forgiveness.  Is Jesus telling Peter (and us) to do the impossible?

What does He know that we tend to forget?  Why is it so hard?  Read the rest of Jesus' answer to Peter in Matthew 18:23-35.   "Therefore the kingdom of heaven is like a certain king who wanted to settle accounts with his servants.  And when he had begun to settle accounts, one was brought to him who owed him ten thousand talents.  But as he was not able to pay, his master commanded that he be sold, with his wife and children and all that he had, and that payment be made.  The servant therefore fell down before him, saying, 'Master, have patience with me, and I will pay you all.'  Then the master of that servant was moved with compassion, released him, and forgave him the debt.

"But that servant went out and found one of his fellow servants who owed him a hundred denarii; and he laid hands on him and took him by the throat, saying, 'Pay me what you owe!'  So his fellow servant fell down at his feet and begged him, saying, 'Have patience with me, and I will pay you all.'  And he would not, but went and threw him into prison till he should pay the debt.  So when his fellow servants saw what had been done, they were very grieved, and came and told their master all that had been done.  Then his master, after he had called him, said to him, 'You wicked servant! I forgave you all that debt because you begged me.  Should you not also have had compassion on your fellow servant, just as I had pity on you?'  And his master was angry, and delivered him to the torturers until he should pay all that was due to him.

"So My heavenly Father also will do to you if each of you, from his heart, does not forgive his brother his trespasses."

As much as we've been sinned against, that isn't the whole story is it?  We ourselves have sinned against God, indebting ourselves to him way beyond our ability to repay, requiring an ocean of mercy.  We don't like to remember that part of the story when we are busy wallowing in our self-justified pain.   The paraphrased version of Jesus' story is this: the first fella was given an ocean of mercy...the second fella needed a teaspoon's worth which the first fella withheld.  Not good.  The lesson: don't follow the example of the first fella.  Instead, remember that YOU and ME owed God so much that Jesus had to bear the full measure of God's wrath in our place in order to forgive us.  Praise His name for doing so!   When Jesus tells us to forgive, He's not asking us to do anything He hasn't already done.  And He much more so.  Let us not confuse our place...it wasn't a teaspoon of mercy you and I needed.

Sometimes the pain we suffer is so intense we can barely breathe.  But He gives us the next breath, and the next as He reminds us that what He suffered for us cost Him His life. Let us fix our eyes on Jesus, our Redeemer. When the pain is real, let us ask God to help us be like Jesus who prayed "Father forgive them..." while He hung on the cross.  Having been forgiven much, let us forgive others freely as vessels of His amazing grace.


Amazing grace, how sweet the sound!


I love this picture available at John the Baptist Artworks.
It is titled "Equal at the Foot of the Cross, Equally in Need of Mercy." 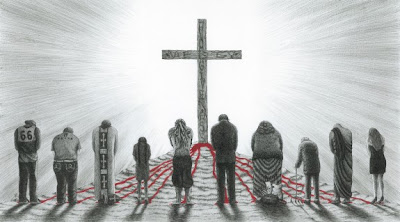