Seven children.
Beautiful, faith-filled, Jesus-loving, world-transforming children.
Ages 5-11.
Team Goal: To raise $5,000
for the Pregnancy Resource Centers
in the Steps for Life event.
Reached: $6,125 (thanks be to God)
The winners?  yes, the "Under His Wings" team was first place fundraisers in their age category, but CEO Larrry said it best...the real winners are the men, women and children that will be served this year at the Pregnancy Resource Centers.  We agree.  All for the glory of God. 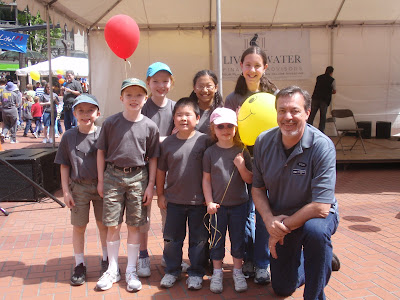 Two quick stories:
Friday morning 6 out of 7 of the kids had reached their personally set fundraising goals. The seventh was only shy by $45.  The cut-off for entering sponsor information was noon.  We were all together at our Friday Co-op and an idea was spoken during the morning Latin class...if we worked hard and finished early, the four older kids could have a little time to go door to door to seek sponsors.  Yes...let's do it was the unanimous, hearty response.  Finishing early, we prayed together at the door and sent the four kids down the road...less than a half hour later, four excited youth returned with 70 more dollars for the PRC.  We quickly entered the info online and everyone at the Co-op celebrated over the reality that every one of the kids on the team were able to reach their goals.  We had watched them ask just about every person they came into contact with over the past month, and their enthusiasm never waned...down to the final minutes they wanted to do everything they could to raise more funds for the men, women and children that receive compassionate care and truthful information in the name of Jesus at these centers.

Last night, after we returned from our family rejoicing together over a little Chinese food, MJ came into the office carrying a box.  "Mom, do you mind if I destroy this box?  I have an idea."  I answered that I didn't mind and went back to what I was doing.  A little later, I went to investigate and found she was making a container to collect her change in which she had decorated with "Steps for Life 2013."

Thank you to everyone who came alongside with prayers and finances...God is at work.  We are so thankful He is pleased to give us the privilege of being a part of His work.  We know the Redeemer, the Healer, the Restorer...we are Under His Wings.  He is our Refuge, our ever present Help.  But there are many who are still held captive by lies and and in bondage to fears...they do not yet know the comfort of His love.  The body of Christ has the unspeakable joy of being His hands and feet...to reach out to the hurting, the confused, the ones who need to hear that they too can be forgiven and move forward in faith as they come to Jesus.  Being involved with the Pregnancy Resource Centers is one of many wonderful ways to do this...we are thrilled to be part of this work and the kids wanted me to thank all of you who joined them in this year's Steps for Life.  It is definitely a cooperative effort.

They will know we are Christians by our love!
Posted by Connie at 7:00 AM