On Face-book tonight I read a discussion thread that related to the idea of asking for help in raising funds for adoption, and it depicted a spectrum of viewpoints.  One argument ran along the lines that if you can't afford to pay the fees related to adoption, you shouldn't do it.  The line of logic carried on by questioning whether the family would have to fund-raise to pay the expenses associated with raising the child too.  I hear the argument and live by the principle behind it largely in my life...we are a pay as you go, live within our means, practice contentment sort of family.  We are children of the King of all kings, not beggars.  But here is a question for us to consider:  Is presenting an opportunity for the body of Christ to work together, where you're offering to do the lion's share of the work, the same as begging?

I admit that I've seen pleas from Christians who have set their heart on something, be it adoption or a mission trip or some other ministry based thing that come across manipulative and desperate and do not reflect the goodness of God very well at all.  These leave a bad taste in my mouth, frankly.  I wholeheartedly believe that God will provide for what He calls His people to do, in His time, according to His wise and loving plans.  But us kids need to remember He is the One setting the agenda and making provision, and we are to walk with a child-like trust in Him, following His lead.  But when we try to set the agenda and then demand He fork over the needed resources for our plans, a good ole-fashion spanking is perhaps what we need.   We're acting like beggars at that point and making our Father look like He's holding good things back from us.  That just plain isn't true!  Aren't we glad that He's a faithful Father who disciplines those He loves?

With that said, sometimes we have to spit the bad taste of the beggarly approach out of our mouth to make room for the beautiful fruit of working together as the body of Christ.  We have to step back from our individualistic mindsets to see the bigger picture of Christ at work through His people to preach the gospel, to set captives free, to minister to orphans and widows, and all the other wonderful redemptive works He is doing in this world as He makes His bride ready for His coming.  This is the mission of the body of Christ, not lone maverick adventures.  Adoption is one of those beautiful opportunities to work together to make the glories of Christ known.  Sure some families can figure out how to pay all the expenses...we did it twice, but even then it was by God's grace and provision, not something for us to boast in.  Sometimes God provides through many people coming alongside you in the journey and they're happy to play a part...we traveled that road to our third adoption, only being able to come up with half the expenses ourselves.  We know from being on the receiving end that we were not aiming to mooch off of others, but that truly it was an opportunity we were presenting for others to work with us to make one less orphan in the world.  I don't know of anybody who helped us that has any regret, and I know we don't, and our son Paul seems pretty happy to have a mom and dad who loves him...our prayer was that God would be glorified, not belittled, in the process.  I believe He answered our prayers.

Sometimes people are moochers and if you bite, the taste left in your mouth is less than desirable.  Sometimes people understand God is at work in ways that are bigger than themselves and they're ready to follow Him, roll up their sleeves and do the lion's share of the work, but they understand if the job is going to get done that others are going to have to come alongside and assist... and they pray for God's provision and make the opportunity known and wait upon the Lord to orchestrate it according to His good pleasure, trusting Him.  I'm finding that assisting these folks is sweeter than candy.

Here's a thought:  If you hold really tightly to the principle that people shouldn't do anything they can't afford upfront to do, you might want to step back and ask if God may be up to something big and glorious...and if He is, maybe, just maybe you might want to accept the privilege of being a part of it.

We were glad, with the help of friends, to have the privilege of hosting another fund-raising garage sale this weekend for the Shubins, Shubins, Masers, and Walsers who are all in various stages of the adoption process.  These are folks who understand God is at work in ways bigger than themselves...sweet  family members in the body of Christ.  Here are a few pics from the event: 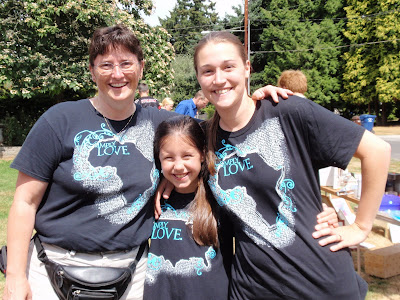 This is me, my daughter MJ, and my niece Leah wearing our somewhat matching "Simply Love" shirts...we have Africa and America represented, but since my two other children are from Korea we think we need to figure out how to get one with Asia represented on the front...any of you t-shirt people know how to do that? 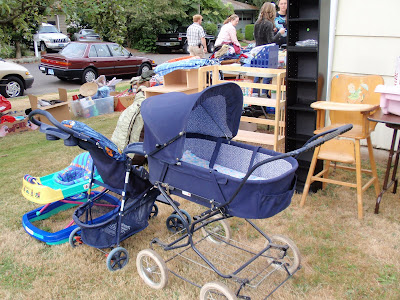 Isn't this a cool perambulator?  Doesn't it scream the stories of Babar?  In the background, you see some of the other friends who came over to help...I would have been sunk without them.  We set up 12 tables around the front and side of our house and had OODLES of donated items...thank you to all the cheerful givers who provided items to sell, and to all who came to make purchases.  We prayed for at least $500 and in dollar form we raised $499 along with a wee bit of change to push us over the top.   Thank you Jesus. 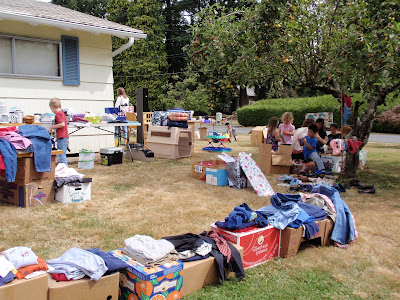 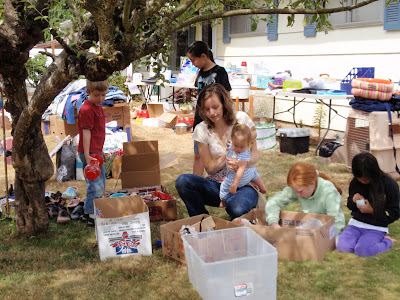 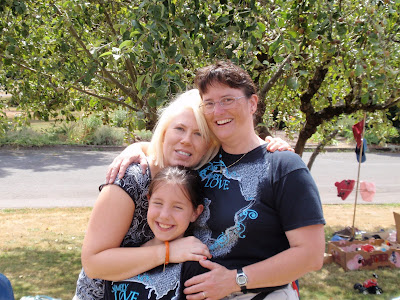 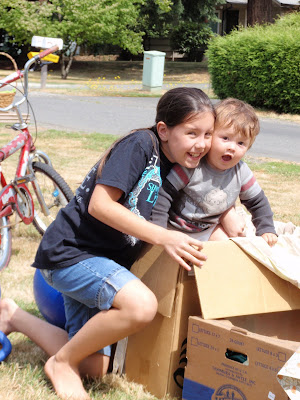 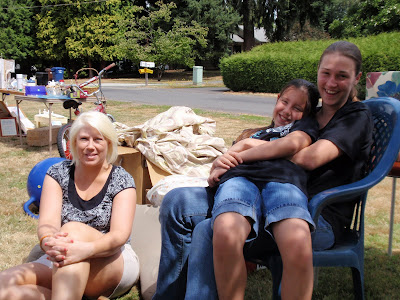 I didn't get a picture of the side of the yard that housed the bulk of the items for sale (sorry Erica).  This last pic was towards the end of the day during a customer-less moment...We were nearly pooped by then and happy to sit for a bit.  The very blond gal is affectionately known to my family as Aunt Angie and we're so excited to see her and her husband Steve begin the process of adoption (their blog is highlighted as the first "Shubin" above).

Our contribution to their adoptions is only a drop in the bucket, but each drop adds up whereas no drops do not.  We're happy to do what we can and thank the Lord for letting us be a part of these amazing stories.  We're not made to be mavericks.  Throughout the creation account, God kept saying how what He had made was good, until He stopped between Adam and Eve to note it was not good for man to be alone.  Our God is Father, Son and Holy Spirit...until Adam was created there had NEVER been aloneness and God made it a point to make sure we knew we were made in His image, which in part means we were made to live in loving community, not as independent mavericks.  There is application to marriage, but broadly we are all made to live connected to one another, married or single, giving and receiving in community as the Spirit leads and empowers for the glory of our great God who made us in His image.
Posted by Connie at 10:27 PM